LILAC is a new co-housing eco-development in urban west Leeds (Bramley), Britain. It is particularly interesting because it is using straw bale, it is accessible (the definition of which I will return to), affordable, grassroots, collective, and (sub)urban. There are 12 flats, 8 houses and a communal house, building work is advancing at a pace and they hope to move in during spring 2013.

View of the site from the road in Bramley, west Leeds

LILAC grew from many years of discussions and a desire for an eco-village type settlement in Leeds. In addition to being ecological it was important for the founders that any development was urban – enabling them to travel easily to work in the city without cars – and that it was affordable – few had the capital to invest in expensive housing. As logical as this may seem, few eco-developments have really achieved this in Britain with most new community builds tending to be in more rural spaces and despite best efforts most required a significant capital investment (or large mortgage). 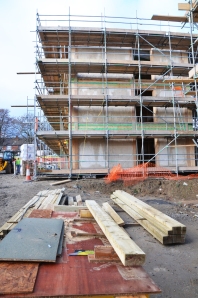 The community and communal aspects of living were also central; notably trying to ensure that delicate balance between providing enough privacy and enabling people to share resources, space and social lives. Hence the co-housing model was adopted whereby people have individual homes (and in this case a small outside space), but share a communal house, larger gardens, play areas, and laundry facilities. Community agreements to manage responsibility and expectations are still being developed but are likely to involve a community contribution expectation of two hours a week (with board members devoting four hours a week). This is actually very low in comparison to other projects I have visited and reflects an approach at LILAC that has carefully considered the workload implications of community living. For example, rather than plant the communal gardens with labour-intensive annals, there are plans to use lots of perennial planting (such as fruit trees) in order to reduce maintenance time and tasks.

Their community house is also much bigger than other examples I have seen, it has a large light meeting area, a nice kitchen, a couple of office spaces, large film showing space, bathroom and shower. Crucially it has been built on the edge of the site so that it is directly accessible from the street and forms a welcoming way into the community. Given its size and location it is likely to become the hub of this new community and it is easy to see the potential for other local groups to use it as a meeting place too.

The buildings are designed by the architects White Design and it is the first residential building to use the Modcell approach. The method involved building wooden frames and packing them full of straw bale. All this is done in a local ‘flying factory’ (a temporary local space where the panels are assembled) and then joined together onsite (a bit like flat pack building). It creates straight block walls and most of the windows are floor to ceiling – giving huge views and a range of light inside.

Modcell have tested this approach and already proved its high ecological credentials, so I have little doubt that the development will achieve its aims of low carbon emissions, low energy bills, low embedded carbon and a long-lasting build. What has yet to be seen is how it will feel to live in the buildings. They could be likened to office buildings; very angular, straight and boxy. It is an interesting aesthetic which is very hard to judge at this stage without occupancy or landscaping, and could be considerably softened by both. Moreover, how furniture, storage and people fit into the space is yet to be seen. 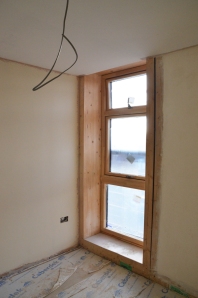 There is also an interesting disjuncture between what makes a building ecological and what makes it pleasant to live in. For example, in the communal house, there is an office on the north side of the building. Because it is on the north side there are very few windows, in fact most are up high and thus difficult to look out from. When I visited with some residents they immediately worried that the room was going to be too dark. But if they added in windows it would change the ecological performance of the building. So is the office missing a window or is the office in the wrong part of the building?

As with all new builds some parts of the design are really inspiring. They have used the hall space in the apartment buildings for spare rooms. It is a really interesting idea. It is a tiny space, just enough for a double bed, but it is private and cosy and is clearly going to be really useful. At the same time, I wonder how other, really small things, might work. There are some interesting problematic locations of window latches. In the upstairs bedrooms (whole, floor to ceiling length windows), two sections open, but I would struggle to reach the top one, despite being tall (5ft 10 inches). In the bathrooms there is a row of windows right at the top of the wall – I could not reach the latches. Not only will this make it inconvenient to use, but will probably reduce people’s use of them and reduce the airing of the building, which in turn could lead to mould issues. However, I am sure there is a simple solution and it is perhaps no more problematic than when I installed ceiling windows that only opened using a turning mechanism – impossible to do from a 10ft distance! In other words, it is always so easy to come in and critique someone else’s building.

LILAC have thought quite a lot about accessibility in all its forms – encouraging a diverse range of residents, ensuring disabled access, designing in affordability, choosing a suburban location (and inviting local residents to engage with eco-housing), and thinking about how the community will run on a very practical level. It is really nice to see a project where there are clearly many different people of all ages going to be living there. The houses and flats are all different sizes, catering for single occupants with one bedroom flats up to families with four bedrooms.

First foor of houses being built

Disability has also been planned for. All the doors are disabled access and will have flush and smooth entrances (low thresholds). Thus all ground floor flats have disabled access. The community house has a lift, which means that they can access all areas, including a shower and bathroom area. However, there is no lift in the apartment blocks, so there is no disabled access to the spare rooms or higher flats. This might all seem logical and certainly many new developments employ the standards of Lifetime Homes to ensure accessibility, but all too often eco-developments abandon accessible designs due to cost and many eco-developments remain the preserve of the young and able-bodied, with little consideration for how people will remain in their homes as they age.

Affordability has also always been central to the plans for LILAC and they have achieved this by developing a model whereby regardless of which size accommodation you live in you pay 35% of your net income for your home. This is paid as a form of rent, but actually residents are slowly buying their home through share purchase (or equity stakes). Once they have bought it their payments reduce and the money is used for communal good. In an era of high house prices, rising rents and falling incomes, this ratio of accommodation costs seems particularly appealing. It has taken LILAC considerable work to develop this system and ensure that it is financially robust and allows for residents to leave and join the community. It still requires a deposit and still enables those with more money to afford bigger properties, but it is one of the few eco-developments to take the issue of affordability seriously, further details are available at: http://www.lilac.coop/concept/affordable.html.

LILAC has yet to be completed but has already generated significant media and political interest. It is certainly a ground-breaking project and they are hopeful that others will be inspired and adopt some of the approaches (such as the affordability model) that they have developed. They are also conducting post occupancy research and have already run workshops to share what they have learnt with others. I have no doubt that LILAC will become not just a great place to live, but a role model for community eco-building for years to come.

For more information about LILAC see their great website: http://www.lilac.coop/, also Paul Chatterton, one of the founders of the project, has recently published an academic journal article on LILAC; Chatterton, P (2013) Towards an agenda for post-carbon cities: Lessons from LILAC, the UK’s first ecological, affordable, cohousing community. International Journal for Urban and Regional Research . ISSN 0309-1317. 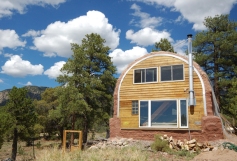 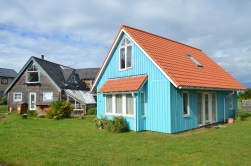 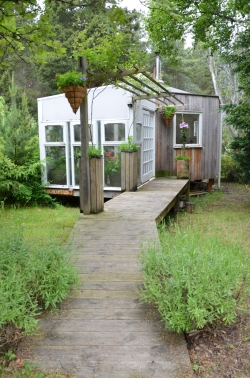 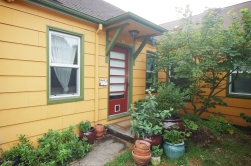