The Triangle Housing Project (Swindon UK) was designed by Glenn Howells Architects  and was the vision of Kevin McCloud of Grand Designs fame. His aim was to build beautiful, contemporary, affordable, sustainable homes and still make money. He wanted to put into practice his ideology that housing should be a combination of Happiness, Architecture and Beauty (HAB Housing). In order to make it affordable McCloud worked with a housing Association (GreenSquare) who intended to sell some properties and retain others for rental.

The Triangle is a 42-home development with a variety of properties from one bedroom to four bedrooms. Completed 2011 its progress and ambitions were documented for ‘Kevin’s Grand Design TV series’ on Channel 4 (in the UK). In other words, this was a developer-led project aiming to incorporate many approaches already tested in more radical self-built housing, but rarely in large-scale British developments.

The project tried to do many things differently to a standard British housing development: it tried to make well-built eco-houses affordable; implemented novel design features to ‘mass’ housing (ventilation chimneys); used new materials (hempcrete); made the houses very small and open plan; and built large communal space. The hempcrete was grown locally and used for the external walls, and rooms were given higher ceilings to enable more light to flood small rooms and make then feel bigger. Individual gardens were small but a large communal garden was put into community trust ownership and people encouraged to grow food collectively. Overall, 50% of land is for sharing. Overall, the aim of this development was to build low-impact, low-carbon, and high-value houses.

Did it work? Maybe it is still too early to tell but the results are a bit mixed so far. This is not to say there is still not a great deal of inspiration to be taken from this project and its novelties were always bound to attract the critics. It is definitely a test case. On the one hand the design has certainly won lots of awards. On the other hand plans to sell the properties had to be put on hold because they would not have been able to sell them at a price low enough to have been considered affordable, in other words, they ultimately cost more than Kevin McCloud had hoped. According to reports so far many residents (all rental) really like it. However, some were mistakes were made. In the TV series following the development it became obvious that no one from the design team had thought to consult potential residents on what they needed or wanted. One new resident said to McCloud that he ‘had needed a woman’s perspective’ to point out that they had failed to design in any space for storage, which with lots of children was proving problematic. Neighbours were also not convinced by the higher-than-average height of the new houses which consequently towered over their existing homes. 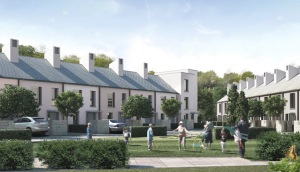 The main problem appears to be the lack of quality building work. In a recent BBC Online article ‘Defects at Grand Designs presenter Kevin McCloud’s homes‘, residents complained of water leaks, cracked walls and ceilings, and broken rainwater harvesters. The architects are putting the blame squarely at the door of the builders describing their work as ‘bad building. There are hardly any design issues there, it’s to do with the quality of the building works’. That said McCloud himself had been shocked at the low budget allocated for each kitchen. At just £900 per kitchen he had worried that the kitchens had looked and felt too cheap. As to whether these are teething problems that all buildings go through, or a more fundamental problem is not yet clear. However, the situation does highlight the expectation and, I would argue, the need for eco-houses especially to be well constructed. Without good seals and well-fit windows, for example, the design features of houses such as this are easily undermined.

For more information about the development there is an interesting review in  The Architects Journal about Triangle, and a brochure about the project. 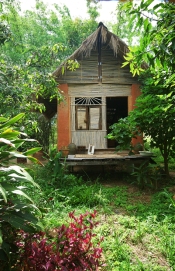 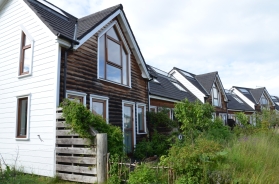 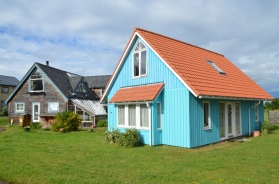 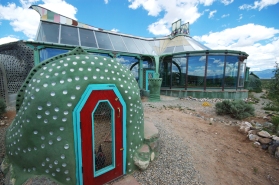 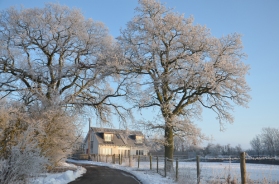 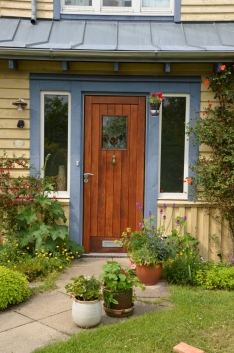 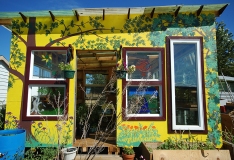